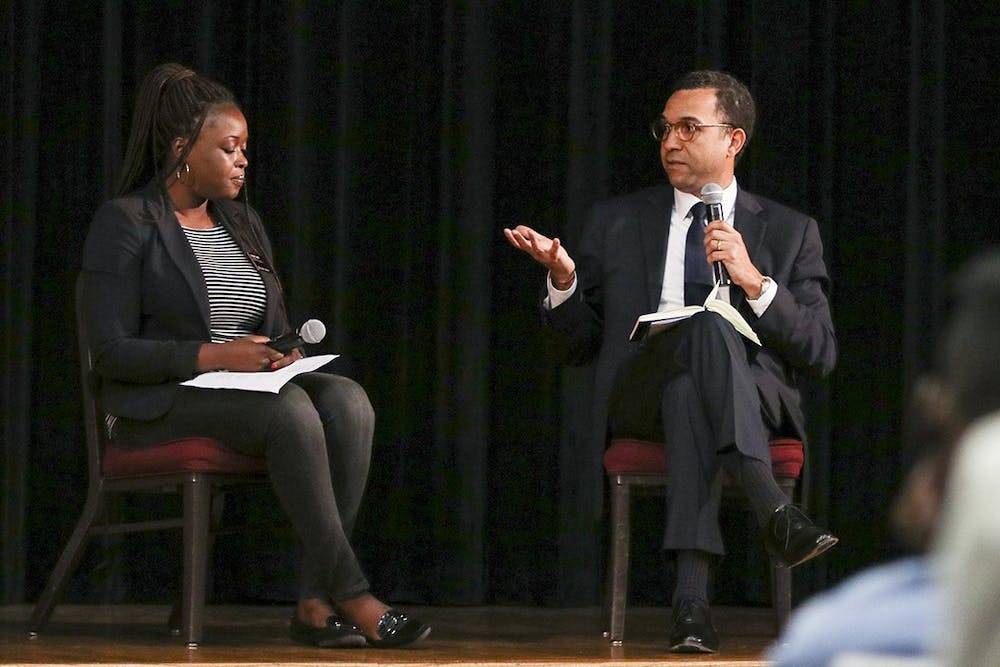 Formed from a council of passionate faculty working to make students feel more welcome, the Office of Diversity and Inclusion serves as an integral part of campus today.

The committee was first introduced by former university President Harris Pastides in 2010 with faculty members joining on a volunteer basis. In 2013, the committee and Pastides recommended there be a specific person to lead diversity efforts at the university.

John Dozier was brought to the university as a consultant before being promoted to the inaugural chief diversity officer.

“In this role as chief diversity officer, I'm able to do the work that changes hearts,” Dozier said.

The initial committee still stands today, but in a different form. Now called the President's Diversity and Inclusion Advisory Committee, it works to ensure "all members of the university’s community feel that they are welcomed, valued and supported" and is headed by a faculty chair.

“The composition of that committee today is largely people who are responsible for or connected to student, faculty or staff organizations where diversity, equity and inclusion is some central part of their mission,” Dozier said.

Dozier moved into education about 18 years ago after a career in the private sector.

“I knew that I wanted to be committed to ensuring that there is as broad of access as there could possibly be to high-quality education and education support services that can be provided,” Dozier said.

His work in high education started in Chicago, where he served in roles such as vice president for academic and student affairs, and eventually president in the Chicago community college system.

Dozier then made his way back to his hometown of Columbia, where he was presented with the position of chief diversity officer.

The most astonishing reaction to this news was his grandmother's, who had a complicated relationship with the school. Dozier’s grandmother attended school at Booker T. Washington High School in the 1940s and would cut through USC’s campus as a shortcut.

“She said, most frequently, they had to walk around campus as opposed to walking straight through campus to get to high school because of the threat of either verbal or physical assault that they would receive from students,” Dozier said.

Dozier's grandmother was surprised at his acceptance of the position at USC, a place where she said she didn't feel safe.

“It’s also not lost on me the fact that I am doing the work to help create conditions that she would never have experienced, creating conditions where people feel a sense of belonging and never fear the verbal or physical assault that might come merely from someone’s identity,” Dozier said.

Today, the Office of Diversity and Inclusion has tackled a number of issues facing USC's campus, including introducing markers noting the use of slave labor in not only the construction of the school but also in the school's overall success.

The office has created a framework for ensuring the practical application of diversity and inclusion throughout today’s campus: "composition, achievement, engagement and inclusion."

Composition and achievement relate to the demographics of the university and how those demographics perform, comparatively. This is measured by graduation and retention rates for students. For faculty and staff, there are other factors considered, such as promotion, tenure and salary.

Engagement and inclusion are measured by campus climate surveys, which began in 2018, and the bias complaint process.

Dozier said the idea that the university has to continue to work towards diversity is “unequivocal.”

“I don't think that diversity, equity and inclusion is a destination. I mean, it's a constant journey,” Dozier said.

The chief diversity officer currently reports to the provost. However, university President Bob Caslen's administration recently made the decision to promote the position to a vice president role reporting directly to the president.

“It's an important elevation,” Dozier said, “I think that a large part of it speaks to symbolism. But another part of it also speaks to, again, having a direct voice with the president and making sure that the President's vision around diversity, equity and inclusion is being exhibited through the work done by the Office of Diversity and Inclusion.”

Dozier, however, has decided to resign from the role and has since accepted a position at Massachusetts Institute of Technology. A search is currently being conducted for the new vice president position.

The University of South Carolina will always be on his mind, though.

“When I think about the work around being a chief diversity officer, and I think about, again, the broad experiences that I've had in higher education, I think it's those experiences that have truly prepared me for doing this work,” Dozier said. “I feel very strongly that this work is maybe the most significant work of all of those roles that I’ve had in higher education.”