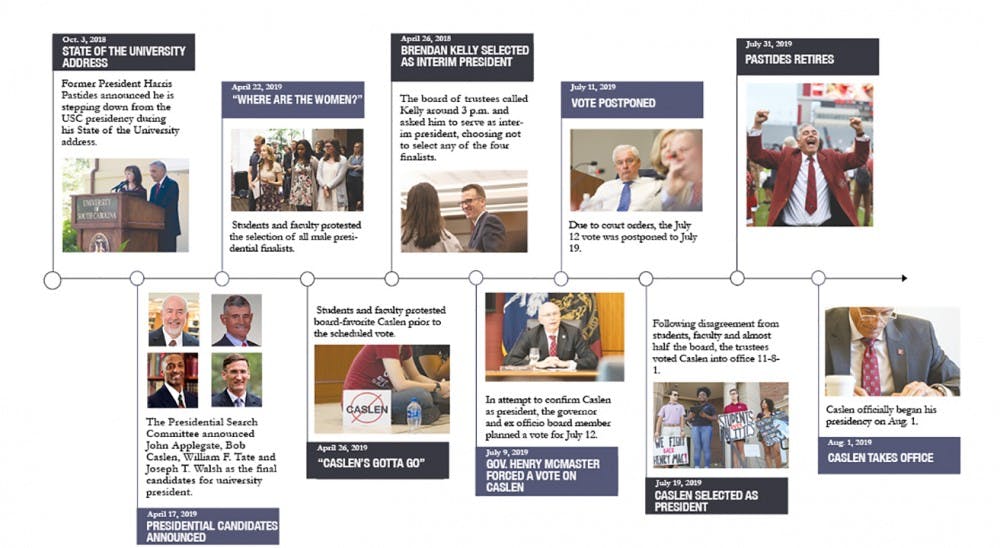 Caslen: The road to his presidency

Students and faculty dispersed in May expecting to return to campus alongside an interim president and a plan to resume the search for a permanent replacement to President Harris Pastides, who retired after 11 years at the helm.

But, in July, Gov. Henry McMaster unexpectedly made phone calls to members of the board of trustees asking them to hold a meeting to vote on one presidential candidate. In doing so, he awakened a sleepy campus.

At that July meeting, amid ongoing protests by faculty, staff and students, the board appointed Gen. Bob Caslen as the 29th president of USC.

This is how the events unfolded — from Pastides’ retirement announcement to the promise of CrossFit workouts on the Horseshoe.

“His enthusiasm is infectious, his vision bright and bold, his passion and energy transformative and his heart as big as the horseshoe,” McMaster said about Pastides.

Pastides was the Arnold School of Public Health dean and the vice president for research and health sciences prior to his presidency, so many students and faculty were familiar with him.

Students have memories of him giving out doughnuts in the library during exam week or taking selfies with students.

Many faculty believe Pastides was a good fit for USC due to his strong research background. Knowing he has big shoes to fill and no extensive research experience like Pastides, Caslen said the first thing he wants to do is listen.

“The fact that I don’t have a terminal degree is going to force me to listen,” Caslen said at his first press conference as president.

He’s also created his own spin on Pastides' selfies and snacks — CrossFit and coins.

Based on the military challenge coin tradition, Caslen is creating USC president’s coins that will function as a reward for students who "demonstrate excellence," and there will be various ways to earn one, including doing weekly CrossFit workouts with the president.

Caslen said he would make himself accessible by walking around campus and attending student meetings and events. He also said he’d like to visit Five Points at night to experience it from a student’s perspective and drink a beer with students.

What about the women?

Six months after Pastides announced his retirement, the board of trustees announced its four finalists for his replacement: all males.

Some students and faculty protested the all-male slate of finalists, questioning a process that failed to produce finalists embodying the type of diversity they expected.

“It’s not that we were lacking women who can fill these roles,” Emily Fisher, a fourth-year English and psychology student, said. “We just haven’t found them.”

The other three candidates were John Applegate of Indiana University, William F. Tate of Washington University in St. Louis and Joseph T. Walsh of Northwestern University.

Among the four finalists, students favored Tate according to comments sent to the board by students following the finalists’ public forums

Lyric Swinton, a fourth-year sport and entertainment management student, attended the forums and said she was impressed with Tate's background and how he answered questions.

"I feel like a lot of times candidates can be qualified, but that special something is whether or not you're connecting with people," Swinton said.

"We want to take out some of the contributing measures towards sexual assault, particularly the alcohol," Caslen said. "We spent a lot of time a lot of energy training and educating our students on the impact,

Soon after the forums, it became known that Caslen was the front runner for board members.

Students and faculty said they were concerned about how his military background would translate at a Research 1 (R1) university like USC where grants, contracts and gifts make up over 23% of the revenue, according to the 2018-2019 USC budget document.

As one of only 131 R1 institutions in the country, and the only one in South Carolina, USC engages in some of the highest levels of research in the U.S.

Because of the importance of grant funding to R1 universities such as USC, many professors said publicly they find Caslen’s inexperience with research particularly concerning. Caslen was the only one of the four finalists without a terminal degree.

The protests due to lack of finalist diversity weren’t the last on campus.

Students and faculty marched to the Alumni Center where the original vote was set to take place.

“This is real, this matters," Ethan Magnuson, a third-year political science and geography student, said. "This is going to determine the future of the university.”

It was with these protests as the backdrop that the board of trustees met on April 26 to consider and vote on the four presidential candidates. The board emerged from that meeting not with a newly named successor to Pastides, but with the name of an interim president: Brendan Kelly, the chancellor of USC Upstate. Kelly would serve as interim president, the board said, while the search was put on hold.

The same day of the vote, Caslen’s son made a comment about USC alumni on Twitter. Jeff Caslen tweeted, “I just realized that people who spell your name wrong at Starbucks aren’t doing it on purpose, they’re @UofSC alumni.” He is a captain in the Army and a West Point graduate like his father.

McMaster turns up the heat on campus

After a relatively quiet few months on campus following the announcement of an interim president, many were surprised when McMaster called for a board meeting during the summer when students and faculty were away.

Jawaun McClam, a fourth-year geography student, said when he first read the news he thought, "This can't be real."

"We always said at the University of South Carolina we have no limits, but after hearing about this, it just feels like, I feel limited," McClam said.

McMaster, because he is governor, is an ex officio member of the board.

"This thing stinks with politics," trustee Charles H. Williams said of the search.

In a letter to the editor, Stanford professor and alumnus Hakeem Jefferson said he was frustrated with the situation and threatened to withdraw financial support from USC if Caslen became president.

Alumna Darla Moore has donated more than $75 million to USC and sent an email to board chairman John von Lehe expressing concern about the selection process according to The State which obtained the email.

“As the largest donor to the university and the namesake of one of the largest schools with a broad national reputation, I’m making a final appeal to the board to reject the rank political influence in selecting the next president,” Moore wrote.

McMaster’s intervention also potentially compromised the validity of the search.

The Southern Association of Colleges and Schools Commission on Colleges (SACS), the university's accrediting body, contacted the university on July 16 with a letter addressed to Pastides requesting a report to confirm the presidential search adhered to its guidelines. The president's office submitted a report on Aug. 10, but has yet to hear back.

After the meeting to vote on Caslen’s candidacy was pushed back a week because of a temporary court injunction, the board was set to vote yes or no on Caslen.

In the days leading up to the vote, the faculty senate passed two resolutions in opposition of Caslen’s candidacy as president of the university. The first criticized the state of the search and the second was a vote of no confidence against Caslen as a candidate for the presidency.

Protesters filed into the Alumni Center holding signs. Some read “Board of distrustees” and “We fight back Henry Mac!” One single Caslen supporter held a sign reading “Restore order, elect Robert Caslen president of USC, thank you Gov. McMaster.”

Ultimately, Caslen was confirmed as the 29th president of the University of South Carolina after the board voted in his favor 11-8-1.

As people began to file out of the boardroom, the protesters chanted “shame” repeatedly.

Up next, faculty senate representatives said they're focusing efforts on finding USC’s next provost, a position which became vacant when Joan Gabel left to become president of the University of Minnesota.

Following Caslen’s appointment as president, he met with faculty and students to listen to comments and concerns.

Student Body President Luke Rankin was one of the first to meet Caslen and said he feels the student body must come together and move forward.

“I think it’s shown incredible, incredible character and monument to who he is for his first step to be meet with students, and to want that to be a process that’s continued throughout everything, not just the beginning,” Rankin said.

Von Lehe was also optimistic about the presidency, despite the widespread protests and nearly even vote.

“Everybody likes [Caslen], so I don’t think the board is going to have any problem whatsoever in supporting him,” von Lehe said.

However, many faculty and students remain skeptical of Caslen’s qualifications.

While von Lehe said he felt students, faculty and donors were fairly represented by the board, professors Drucilla Barker and Bethany Bell felt differently.

“[The board] failed to safeguard the well-being of the University of South Carolina,” Barker said.

Bell, chair of the faculty welfare committee, said it will be difficult for faculty members to view Caslen as a leader.

Caslen said his biggest reason for staying at USC, even after the controversy of his appointment as president, is because he wants to help bring the campus back together.

"I wanted to be a part of fixing and healing it, because I was the lightning rod that caused the conflict," Caslen said. "This is an opportunity to build a team that can make the University of South Carolina the preeminent higher education institution in America."